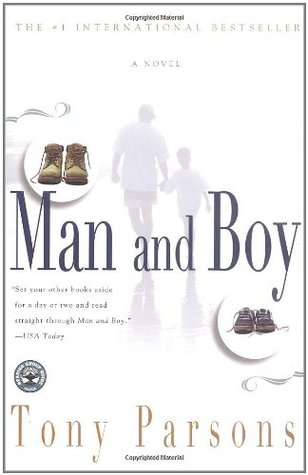 Got this book, Man and Boy by Tony Parsons, from a book shop named Paperback in Bangalore, when I had been there to meet a friend. It was on a discount sale and did cost me around 150Rupees only. When I read the blurb, I was so captivated by it, I took it immediately. And I am glad I did. I have been savoring this story for a while now. The writing is so awesome, that I am so in love with it. Its so real that it hurts sometimes. It is also interlaced with humor that you find yourself smiling and laughing at very odd situations. It is placed under the genre of Chick Lit !? Really? I haven’t read Kramer vs Kramer so I can’t compare or anything, except that I really loved this book and glad that I got a paperback at Paperback 🙂

Especially with the mood I have been in recently, and the story also going in parallel, I had to read about a death, again of that of a father, and the impact of it on the people left out. But for some reason, I felt good reading about it.  It sort of tells you that its something that everyone go through. In this story too, there is this 5 year old kid (my nephew is 4 years) who loses his grandpa and is trying to come to terms with it. Its a story of a man becoming a father to his son and a son to his father and finally understanding what it all means. It was so heart warming. It makes you think of the relationship you have with your father. And also that of all the kids whose parents fight for their residency (not custody)

I am not going to go in depth with the story or anything. I gave a 5 star in good reads for this book. I just loved it so much. No wonder I took my time with it (its been more than two weeks since I started it I think). I thought the end was a bit cliched but still, that’s perfectly fine. I like my happy endings, even if I am not sure of its ‘ever after’ in this.

View all posts by KG