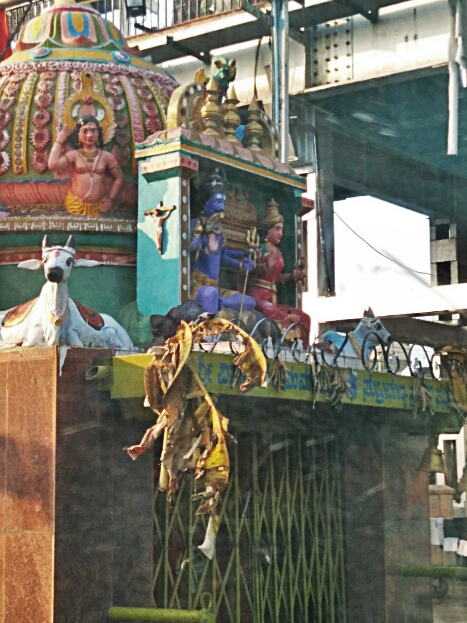 Can you spot the odd thing about this photograph? This was taken in Bangalore Railway station from my coach window before I left to Chennai on Friday.

Recently while driving through Hosur Road, Bangalore, we saw a cab which had the logo of WOW on it. It was driven by a woman. You don’t generally see many cabs driven by women. It had a pink symbol on it. But I couldn’t see very clearly what it was. And after that I totally forgot about it until today when the word WOW popped on my mind. I know of a WOW club which stands for Women of Wanderlust group where tours  (both national and international) are organized for and by women. I assumed this one with the cab must be something related to wheels. And the search led me to Women on Wheels group, where cabs are run by women for women. In a place where sometimes women in cabs (driven by men) are being raped or being asked for sexual favors instead of payment is very prominent, this is a big deal. But I don’t know if many women know about this at all. Since I don’t read newspapers anymore I am not sure if there are ads taken out for these cabs. I know that they don’t show up when you search for cabs in your local area. I hope they become more popular and they get more support from women. My friends used to mock that if I am ever out of a job, I can be a good cab driver. Now, I know a group which would take me in 😉 I will definitely try them out next time I take a cab.

For this week’s Cosmic Photography Challenge theme, I am using two photographs taken in a mall during the December of 2014. I have processed them using Picasa and have tried to give a different vibe to it.

Wanna join in? Here is how:

Create a post with ‘K’lee and Dale’s Cosmic Photo Challenge’ in the title. This week, the prompt is : Reflections.
Post a photo to your blog, pingback to either Dale’s or K’lee’s post and don’t forget to add the tag #CosPhoChal to your post’s tags and that’s it!

M: Honey, rainy days are made for online shopping, don’t you think?

F: Not when it is raining deals out here.