Harry Potter and the Cursed Child – Parts One and Two

As I updated earlier,  here are my views about this book. I got this because

b) I wanted to treat myself the other day after a hard and tiring hour of window shopping (you can roll your eyes if you want to 😉 , but that is indeed a very tiring thing for me to do)

Now after reading the book how do I feel ?

Wasn’t I happy to get back the Wizarding world and all that it entails and be part of this lovely family whom I love so much? Yes, that is precisely the reason I got this book and read it too. But I am miffed that the marketing got the better of me by selling me a book which is worth only 150 pages max if you include all the pagination and paragraph alignment etc for double the page size and double the money. Even with the series, I wasn’t happy when the story was all drawn out and dragged to include more pages. This isn’t even part of the series. The underlying story is very very simple. And yes, it sounded more like a fan fiction than anything else actually. And it had lots and lots of time travel, a concept which I am not a fan of. And getting my head around it was so confusing and well… I wish they hadn’t been on that for so long. Some dialogues were good, no doubt.

The father son relationship part  was OK. Unusual friendships – expected. Many scenes from the series were revisited (of course they had time travel right?) which was good in a way, but after a while, you feel that it is all there to it. If you remove all those, there isn’t much actually. I feel that there isn’t much of a value add to the whole series. As a play I don’t know how it would be, but if it was just that, then I guess I would have been OK. But promoting it as the next  in the Series, well … I don’t think that is fair. Would I watch the play after this? Nope… Don’t think so. It might have been done very well, but now I got the images of how things would be in my head and I don’t want those to be altered by the play version. If they make a movie and bring back the same kind of scenes as earlier and revisit it, well…that I might watch.

To be fair, they did market it as the play and not a fiction so I guess I should not have had high expectations, but I didn’t expect that half of it would have been a reminder of the scenes from earlier books. That was what annoyed me more. There is a rumor that there are three more books. If they are going to be about the children of the trio, I wouldn’t be as interested in them as I was in the original HP series. I always wish that people would leave a successful series be and not try to keep going on with it. It kind of loses its charm for me after a point.

Goodreads rating: 3/5 (because of my loyalty towards the series)

Finally, it took me just two days to complete the new Harry Potter book ‘Harry Potter and the Cursed Child – Parts One and Two’. I will keep you updated on my views about the book in a separate post (need to gather my bearings before I write that down) but if you want to hear only good things about it (obviously, no spoilers will be revealed) then you might want to skip that. Now I hear that there are three more books planned? For some reason, that doesn’t excite me. Why? I don’t know as of yet. But once I gather my thoughts, which are everywhere right now, I might get an answer.
In the mean time, I am keeping up my date with ‘The Wire’ series and completed Season 2 over the week. I am planning to do one season per week, if possible. So far, I am just loving it. I have also caught up with the latest episode of ‘The Night Of’.  All is going well in the TV series area and I am glad I am sticking to those two for now.

I remember my dad’s very old and very dilapidated guitar that was kept in the lofts and used to wish my dad kept it in good condition so that we could try learning to play it. But he played it during his younger days and had lost touch but for some reason, kept that guitar for far too long. I learned to play guitar 4/5 years ago and continued for 2 years but then with constant travelling and work, had to give it up. Now I have totally lost touch. And it is in my loft. So when my friend asked if she could loan it for her son, I was only glad because it will be brought back to life again, if not by me by some one who is willing to learn. I have plans to learn playing it again once I get other things sorted, but until then I don’t want it face the same fate as that of my dad’s. Anything to keep my guitar alive and the music floating.

Your Friday prompt for Stream of Consciousness Saturday is: “date.” Use it any way you’d like. Have fun!

“How do you know you have lost touch with physical books and have been using the kindle for far too long? When you forget that you really have to turn the paper rather than clicking it. ”

-Something that happened yesterday night when I started reading the Cursed Child book. I was left wondering for a while why the page didn’t turn.

After what felt like a whole day but in reality was just an hour and a half of window shopping for a particular kind of dress that I had in my mind, for a special occasion, I thought why not reward myself for putting in so many hours at the mall, all by myself and without actually getting any positive result for the purpose I was there. I am a go-to-a-shop-and-just-pick-a-dress-that-captures-your-eyes-and-better-priced-and-get-outta-there kind of woman. I don’t like choosing, trying, wondering if it would be OK or not etc etc… I would go mad. But this occasion demands it and moreover, I promised someone that I will try, really really try. So I had to keep my promise. Some promises are so not easy to keep. But I also needed a pick me up after that effort. My eyes were going hazy after all that time. So went into the Sapna Book house in one of the floors on the way back, picked up this book, billed it, and got out of there. Didn’t even loiter around for anything else. I am half way through another book now. So this would have to wait for the three day long weekend  that is coming up.

I still have my reservations about this book, because it is more of a play format than a book format. But then I wouldn’t have not read it. It might have taken me time to do it. But eventually I would have. Now once I read this, I am sure I won’t be bothered to go to that play, unless and otherwise someone is gifting me those tickets 😉 (AM: I hope you read this post) 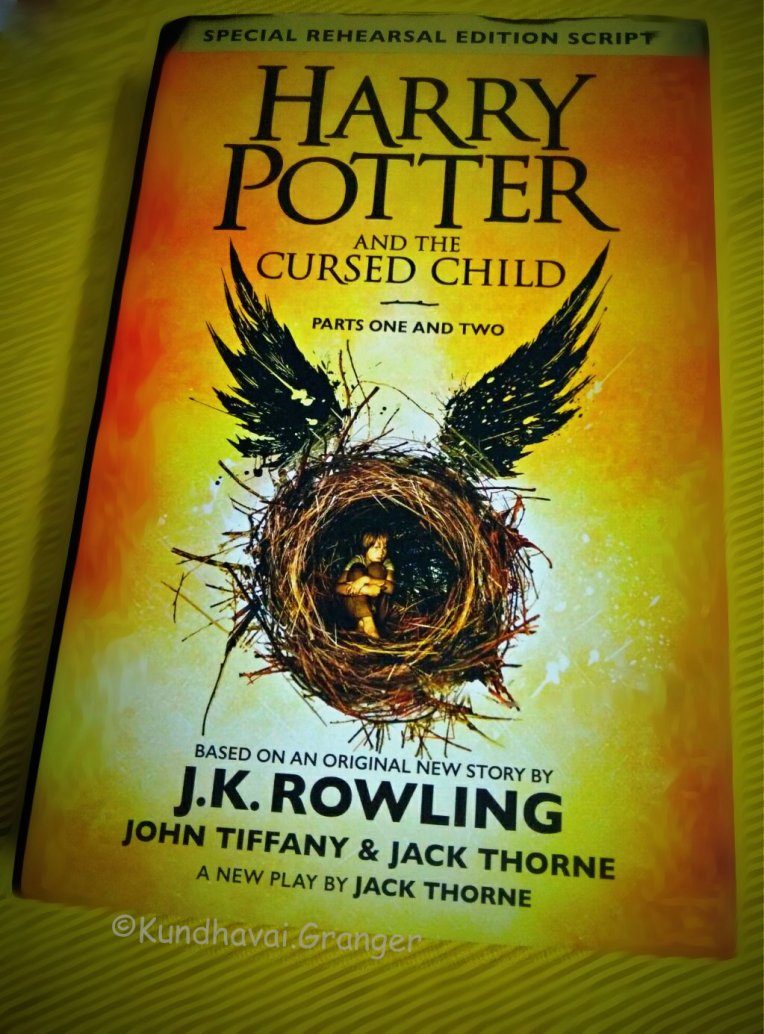 Whenever I cross this place, I wonder when I will be going in to watch the play. I tried to book it in this time, but it was all full and the only slots available were in end of August (I am leaving coming Monday) . So I decided to wait until the craziness would die down. But with more spoilers coming in, I wonder if it is a wise decision to put it off until later. Also heard that there might be a movie that might be made  based on this play. Wonder how that will turn out.

This waiting game sucks…(and yes, I am talking about Game of Thrones too…book and series) 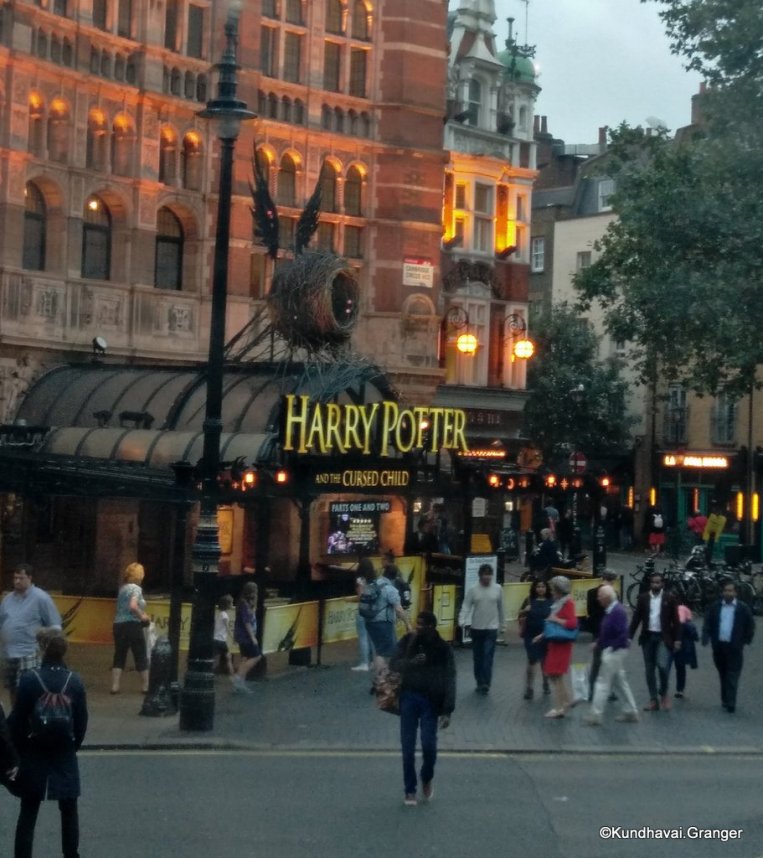