Same product, same name, but pronounced so so differently. Now, I wonder why that is. It confuses people like me.

In most of the tube stations here in London, we do not have stairs. We always have the escalators or a lift. I try and take the stairs when and where available and if it’s easily accessible too. One day on my way to school, I decided to use the Hampstead station route. I have been through this station and always noticed that no one ever uses the stairs, not that I had noticed one anyway. That day for some reason I saw the sign to go through the stairs and it was kind of tucked in a corner. That should have blinked the red lights…but I can be colour blind sometimes and I wondered why do I have to wait for those lifts (one of the four was out of order)? Let me just climb the stairs. It said, “There are 320 steps and do not use it unless it is an emergency”. Now we know that those are standard legal terms that they write everywhere. 320 isn’t much, is it? So I just started climbing the stairs.

Slowly and steadily as I climbed step by step my mind started to realize that there wasn’t anyone else climbing other than moi and then it slowly began to realize that there was a reason for that number 320 and the steps being tucked away in a corner. I must have climbed almost halfway through it when my heart decided that enough is enough. I literally thought it would stop breathing. I had my asthma inhaler with me, but I had already used my reliever one in the morning so there shouldn’t be a need for me to use one for another 12 hours minimum.

I thought I must be halfway already and there would be no point going down and taking the lift, so I might as well just climb the remaining stairs albeit very very slowly. In order to divert my brain from the panic rising in my heart, I started imagining a scenario where I am closer to the end of the stairs, even though when I looked up I could only see more steps curling and curling with no end, and that people are waiting for me with a camera and a mic and giving a live commentary about how close I was to making it through…yadda yadda yadda… I saw myself finally climb those last few steps and those people looking at me like I am a fool to even attempt it but then also praising me for my valiant efforts on completing it. With those scenes playing in my mind and willing my heart to give it’s all (I haven’t made my will yet… and I wanted to be conscious when I finally reach to make one) I finally made it. I almost crawled the last few steps. There wasn’t a soul around to see me and if there was one, they must have thought me a numpty to even attempt such a thing.

My legs almost gave up on me and that wasn’t the end of it. I still had to reach my school which was another 10 mins of drive from there by bus. I ended up having another dose of my inhaler and couldn’t speak for almost half of the day. My throat was all scratchy from trying to breathe. One of my colleague who saw me in such a bizarre state asked about it and I told her about my expedition of the day and she said that Hampstead was the steepest of the climbs and that is why people do not use the stairs in that station. I felt so dumb. Not my finest Monday I should say. My thinking was all muddled up that morning (I will blame the weekend!)

A couple of weeks later, one of my colleague came in the bus I was in and she almost fell down getting to her seat. On enquiry, she said that she just climbed the 320 stairs which she hadn’t known was that steep and it almost killed her. I sat back a little relieved that I wasn’t the only one 😉

Found outside a coffee shop near Primrose Hill, London 😉 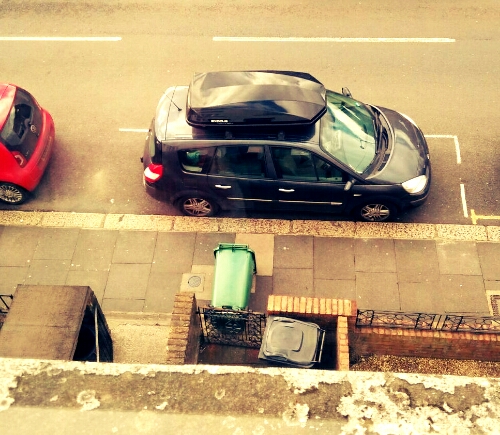 Thanks to #StormDoris our garbage bins were trying to elope. Nabbed them before they could get out of the gate.