“the sea crimson sometimes like fire and the glorious sunsets” – Ulysses

Can you see how the slaves are sitting down after carrying the palanquin for so long?

When you fall from above, you feel so weightless, at least until the parachute is opened. 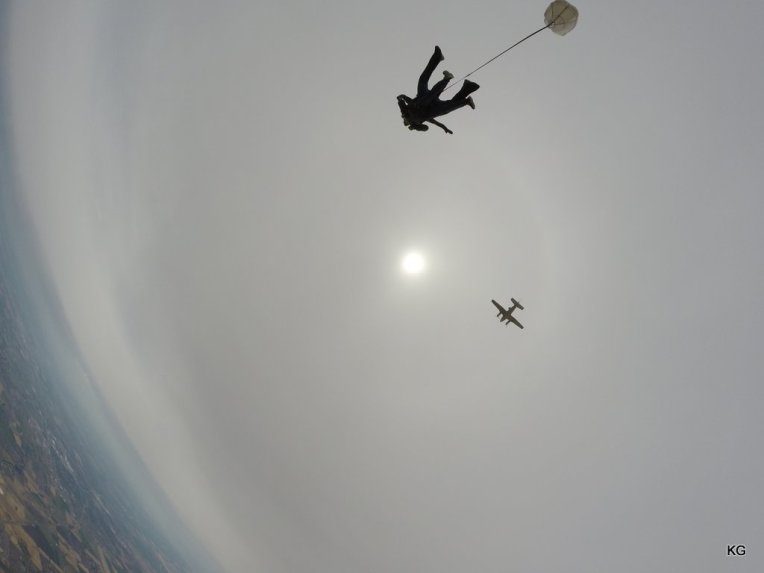 Recently, when I was skyping with a person from UK, the first thing they noticed was that I had a fan running on. The comment was ‘You have a fan!!!’ It was said with such an exclamatory effect , it had me in splits. I have been to US and UK and I did realize that they have air conditioners to change between the temperatures (make it hot when its cold outside and make it cold when its hot outside) but we Indians (and I guess most of the Asians or at least South and East Asians) still rely on our good old fan , even though many have slowly started to use the air conditioners for summers, but still, it is only for cold air. We really don’t get a season that cold enough to use a heater, so we are good there (at least down south we don’t) When I was watching the episodes of Anglophenia (to which I am subscribed to), I saw this one and made me smile. Mostly because we follow a lot of what British people (or should I say Britisher’s) left us with when they were ruling us.

Now that you have got some idea, here are some points with respect to Indian homes. Hope you enjoy them 😉 .
a) We do have plug points just like the British, with an on and off switch (which is something my friend who moved to US recently was complaining about) but they are not down and near the floor. Most of our switches are almost at 5 feet or above.

b) We do not have baths in our bathroom. That means we do not have bath tubs (unless you belong to the rich group or you have fancy bath and have enough space to install a bath tub at your apartment or house) We only have showers or fill the bucket and use the mug to take a bath.

c) Kitchen is totally off limits to anything related to washing, unless it is washing the utensils. There is either a utility area (which is currently the norm in new apartments) or the backyard or a place beyond the kitchen for washing machines or to have a big unmovable stone to wash your clothes (the age old , use your hand to do the washing kind of thing, which we still follow)

d) Most of the homes do not have a plug point for anything else other than a switch for the geyser or water heater in their bathrooms. Most of us still use the old style non electronic razor (remember the one the Bond used in SkyFall ?) So our hair dryers or electronic razor are either done in the bedroom (where there are additional electrical sockets) or may be in utility area.

e) Most of the houses here do not have facility for Western Toilets, but even if they do, they do not have facility for health faucets. Recently people have started to install health faucets but still, we do lack a place for paper towels. So do not expect paper towels in our homes. We all still use water and wash our hands with soap after and use the cloth towels to dry them off.

I am a little late for this prompt, but my Saturday went in a blur and I don’t remember half of it 😉
But one thing that I was glad to hear as the first news yesterday was the Supreme Court’s ruling of same sex marriages in USA. Nothing could have put me in a good mood and I was really happy to get drunk on it 🙂
Seriously though, I was glad for my friends for whom this court ruling makes a WHOLE LOT of difference in their lives. When I went to USA this May, I was fortunate to be the photographer of the civil court marriage of two of my very close guy friends. I don’t care what any religion says, all I care about is for my family and friends to be happy and if they find their partner or soulmate in the same sex, so be it. And this legal decision goes a long way to bring equality in a manner of sorts. I am also happy to post this on this Gay Pride Day (it is already Sunday here as per IST, so).

And I love the last paragraph of Justice Kennedy’s speech. I am posting it here, because it has the word ‘some’ in it 😉 So yeah I did fulfill the prompt’s challenge.

No union is more profound than marriage, for it embodies the highest ideals of love, fidelity, devotion, sacrifice, and family. In forming a marital union, two people become something greater than once they were. As some of the petitioners in these cases demonstrate, marriage embodies a love that may endure even past death. It would misunderstand these men and women to say they disrespect the idea of marriage. Their plea is that they do respect it, respect it so deeply that they seek to find its fulfillment for themselves. Their hope is not to be condemned to live in loneliness, excluded from one of civilization’s oldest institutions. They ask for equal dignity in the eyes of the law. The Constitution grants them that right. The judgment of the Court of Appeals for the Sixth Circuit is reversed.
It is so ordered.

“Life is a sum of all your choices”.

To all those to whom this decision makes a difference, Congratulations! and a big hug from me!

Your Friday prompt for Stream of Consciousness Saturday is: “some/sum.” Use either or both words, or choose a word in which either are used as a prefix or suffix. Have an awesome time with it!

I will take this opportunity to let you all know that I will be away for almost a month in May because I will be doing my yearly vacationing that time. This time my journey is to a place I have already been on official visits. Yup, I am going to USA, specifically to San Francisco. 3 weeks of relaxing and probably some small trips (I hope I do Vegas this time again, with friends 😉 ) Usually, I will be planning like mad but this time I am not. I am just gonna take the day as it comes and since I am going to be staying with friends, there will be no dearth of fun. I have a wedding to attend to too.

Things that I would love to do are a) eat a BIG icecream at Ghirardelli square b) do an adventure sport (skydiving or paragliding anything that is thrilling) c) Go to Drake’s beach and Point Reyes again, at least to show that wonderful place to my friends (who are travelling with me and who even though have been in SFO, haven’t gone there yet) and there is one more thing I need to do, but will let you know once I do it… (I know if I do it, my mom is gonna freak out on me 😉 )

But before that, I am eagerly waiting for my nieces and nephew who are gonna come down to my town for their vacation and spend some time with me before I leave for my vacation. Some fun times coming up.

Your Friday prompt for Stream of Consciousness Saturday is: “-jour-“: add a prefix or suffix to complete it or use it as the French word for “day.” Have fun!

Google reminded me that almost 5 years ago I was in India enjoying the nature and looking at some clear blue sky. I forgot where I was though. Wonder what I was thinking when I took this picture. 😂#personal #photography #canon70d #blastfromthepast #reminders #clearskies #india #nature #beauty #weather #landscape #randomphotos #memories #nofilterneeded