If you are a fan of Harry Potter, you would definitely remember this quote
“Happiness can be found even in the darkest of times, if one only remembers to turn on the light”
One of my very favorite quotes from one of my favorite book in the series, The Prisoner Of Azkaban.
I loved the movie too. One of the movies which I really loved and it was adapted very well too. I sort of miss them you know…the whole Wizarding family. I guess I will start with the books again once I am done with the current one.

Your Friday prompt for Stream of Consciousness Saturday is: “light.” Make use of it any way you like. Have fun!

I wrote a series of posts on how certain books helped open a door to a whole new world for me and I categorized them with the term ‘Portable Magic‘ because ever since I heard the term ‘Portkey‘ in Harry Potter I associated that with the books. And for all the Muggles out there, a Portkey in Wizarding lingo refers to an object used to travel to another location, which is rather specific in Harry Potter’s world, without drawing any attention to anyone else around them, especially Muggles. So imagine my surprise when I come across this TEDTalk where Mac Barnett talks about why a good book is a secret door and how much it aligns with my idea of a book. His was a secret door and mine was a key to the another world/place. Mine can be considered a superset of his, that is all 🙂

Here is the 17+ mins talk which I found interesting and funny.

I got these forwarded to me. Thought that I would share with all witches and wizards out there.

Today’s gossip on the latest happenings in Wizarding world as reported by Rita Skeeter. Apparently, there is a Quidditch World Cup 2014 going on in Pottermore which is being reported by Rita Skeeter regularly and 08th July’s edition of the news contains the happenings in the world of Harry, Hermione, Ron and some other members of Dumbledore’s Army. 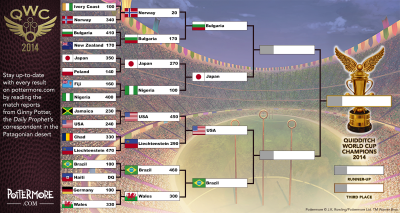 And a slightly older one:  If you want to see some funny reactions to the Mom and Pop quiz : Harry Potter Edition check it out. The last guy was the best. Just refused , totally refused to high five his parent. There seems to be a lot of pressure on the parents from their kids.